Velu Nacchiyar: 1st Queen in the History of India to Win Battle against the British 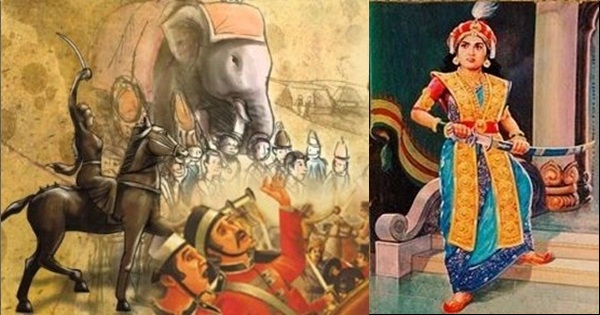 There are names, the very utterance of which, will ship you to warriors’ paradise! You will experience goose bumps!! Their lionhearted endeavors inspired many to fight for India’s independence. Many kings and queens, all freedom fighters, are glorified in History and many are scarcely appreciated. The sacrifices of many freedom fighters have been wiped away from the pages of History! Today, we breathe free and live free because of the collective sacrifices of our brothers and sisters by our motherland.

Amongst the unsung heroines of Indian Independence Movement is Rani Velu Nacchiyar, the queen of Sivagangai, presently parts of Tamil Nadu. She is the first queen in the history of India to wage a successful war against the British!

Velu Nacchiyar was the daughter, the only child of King Chellamuthu Sethupathy and Queen Sakandhimuthal of Ramnad kingdom, Tamil Nadu. She was born around the year 1730. A scholar of numerous languages, she was proficient in French, English and Urdu. Velu Nachiyar was trained in martial arts, use of war weapons, archery, and horse riding. She became an expert in the use of Silambam (fighting using stick) and Valari (a boomerang-shaped weapon; it can be hurled in the air at breakneck speed during hunting and war).

The princess was married to Muthuvaduganathaperiya Udaiyathevar, the king of Sivagangai. The couple was blessed with a daughter. Muthuvaduganathaperiya Udaiyathevar was killed in a battle against the combined forces of the British and Nawab of Arcot at Kalaiyar Koil on 25 June 1772. The invading British army plundered Kalaiyar Koil and collected jewels worth 50,000 pagodas.

Queen Velu Nacchiyar fled with her daughter Vellacchi to Virupachi, a neighboring kingdom ruled by Palayakaarar Kopaala Naayakkar. She was all determined to take vengeance against the British. On her way to Virupachi on horseback with her daughter and followed by British forces, she came across a cowherdess named Udayal in Ariyakuruchi Kollangudi forest. A thirsty Velu asked Udayal for some water. Udayal knew she was the queen. She offered her water and asked her why she was in a hurry in the forest.  The queen told her that she was being chased by the British forces. She immediately left. British forces reached the spot. They asked Udayal if she had seen the queen. Udayal bravely replied that she had seen her but would not tell them which direction she went. The British first chopped off her left hand as punishment and asked her to tell them which way the queen went. Udayal remained adamant. She would rather sacrifice her life for her queen! The British forces then chopped of her right hand and finally beheaded her.

Later, Velu Nacchiyar came to know about Udayal’s sacrifice. She remained in hiding at Virupachi near Dindigul for eight years under Kopaala Naayakkar. Dindigul was located at a distance of around 100 km from Sivagangai. During the eight long years in hiding, she managed to arrange a huge army. Her army also included a big contingent of women warriors under the banner of Udayal Padai in memory of Udayal. This wing was commandeered by Kuyili. Velu Nachiyar herself trained them to perfection. Kuyili was a beauty with brains and was one of the ablest of the queen’s commanders.

Periya Marudhu and Chinna Marudhu, two Marudhu Pandiyar brothers helped Velu Nacchiyar in arranging and training the army. Muthuvaduganathaperiya Udaiyathevar had appointed them in the Sivagangai state army after hearing about their deeds of bravery. The two brothers had killed tigers that created havoc entering the residential area of the kingdom.

In 1780, Velu Nacchiyar formed an alliance with few neighboring kingdoms and was all geared up for a war against the British. She marched with her allies and army towards Sivagangai. On the way, they encountered enemy troops at intervals. Their army first encountered Mallari Ryan, the supporting Palgar of the Nawab of Arcot at Madurai Kochadai. Within an hour, the queen and her forces killed all of the Nawab’s soldiers including Ryan. At Thirubuvanam, Mallari Ryan’s brother put up a resistance against Nachiyar’s army led by the Marudhu brothers. Mallari Ryan’s brother was easily defeated.

The queen and her army then encountered the combined forces of the Nawab of Arcot and the British under the command of Captain Martines at Maanaamadurai. A fierce battle ensued. The colonial alliance retreated when many of their soldiers were slain and when they saw that defeat was certain. After this, Velu Nacchiyar reached Kalaiyar Koil, the place where her husband breathed his last, fighting in the battlefield. Here she encountered British captain Joseph Smith. He was one of the British soldiers who slaughtered her husband. The queen’s army defeated the British forces led by Joseph Smith.

The British stationed at Sivagangai were alerted of the approaching army of Velu Nacchiyar. Meanwhile, the queen and her army continued their march towards Sivagangai to recapture the fort and drive away the British from the city. They were all the more determined to fight against the British. The queen had stationed spies in Sivagangai so that she was alerted on possible strategies and tactics to be employed by the British. The spies rushed towards the queen and advised her not to march towards Sivagangai at the moment as British troops were all ready with heavy guns and ammunition including cannon barrels at several places at a distance of a kilometer each in and around Sivagangai.

The enemy British forces were superior in terms of guns and ammunition using which they could kill their opponents from a long distance. Rani Velu Nacchiyar wished that the enemy’s ammunition and guns were destroyed so that she could successfully wage a war against them. The spies also told that the British stored the guns and ammunition at a warehouse inside the Raja Rajeswari temple at Sivagangai palace.

During ancient and medieval times, and to this day, devotees on particular festive occasions walk several miles to visit their favorite places of worship. Kuyili, the commander of the Udayal Padai women’s wing, saw a group of women walking towards the route of Sivagangai. She asked them where they were heading to. They replied that the next day was Vijayadashami. It was only on Vijayadashami day that the British allowed entry of only women to the Raja Rajeswari temple at Sivagangai palace for worship.

Kuyili immediately devised a plan for the queen. She undertook complete responsibility by volunteering for the task. She chose Vijayadashami as the day for executing her plan. Kuyili divided the Udayal Padai wing into groups. They all disguised as worshippers and hid weapons tucked into their sarees. Velu Nacchiyar, also disguised, mingled in the group. And the groups, one after another, headed towards the temple. Three rounds of worship were to be carried out at the temple, which the queen and the women army were well familiar of. They strategized to strike after the third round after the general devotees would leave.

A face-to-face fierce battle ensued. The British stood no chance before the queen’s mighty warriors. They were defeated. Captain Benjour surrendered. He pleaded begging for his life at the same time promising that the British would never interfere into the affairs of Sivagangai kingdom in the future. Velu Nacchiyar spared the captain’s life and let him free.

Queen Velu Nacchiyar regained her kingdom. She ruled for 10 years and later vested the administrative powers of her kingdom to Periya Marudhu and Chinna Marudhu, who were experts in their respective roles. She built a temple in the name of Udayal at Ariyakuruchi. This temple is known as Vettu Udayal Khali temple. Velu Nacchiyar died on 25 December 1796 after anointing her daughter Vellacchi as her successor.

1. Thamizh Is Not Just A Language: The Valour, Madhan Kumar